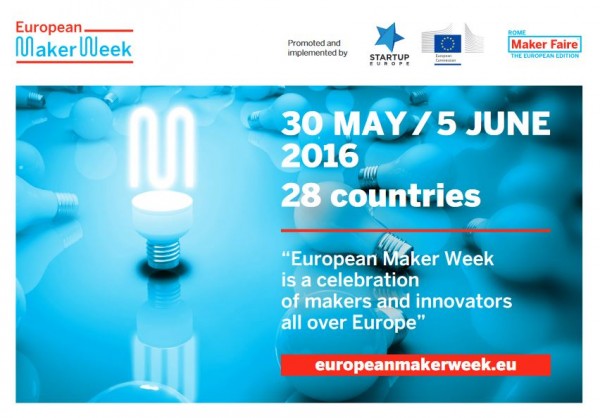 The European Maker Week Is an initiative promoted by European Commission and implemented by Maker Faire Rome in collaboration with Startup Europe, aim to draw European citizens to the “Maker world” and the FabLab, Makerspaces, Hackersapce and the Hardware Startups Environment.

The aims of European Maker Week are two folds:

To create awareness about the importance of the maker culture to foster an education of creativity and innovation in all schools across Europe.
To build bridges between local authorities and media and the main players of their own local makers ecosystems.

We particularly want to reach out to new players (e.g. Schools) who have never organized a maker event before.
What is the “Maker Movement”?

The “Maker Movement” is the name given to the increasing number of people coming from different backgrounds, who are employing do-it-yourself (DIY) and do-it-with-other (DIWO) techniques and processes to develop unique technologies and products as well innovative solutions.

Over the last decade the Maker Movement has constantly grown thanks to the development of the DIY culture among the society, facilitated by Internet, where anyone can experiment and create innovative solutions by virtue of a mutual collaboration. Furthermore, the spontaneous and simultaneous growth of projects and technologies like Arduino, Raspberry Pi, MICROBIT, 3D printing physical places like Fablabs and Makerspaces where people can meet and exchange knowledge. The Open Hardware philosophies have played also an essential role in the development of the Maker Movement.
And what  about in Europe?

The Maker culture has significantly spread over in Europe in the last few years, thanks to the increasing number of innovative projects, workshops and stories made by people who build their own vision of the future through ingenuity and creativity. Europe is the continent with the highest number of FabLabs and Makerspaces and was the birthplace of revolutionary projects like Arduino, Rapberry Pi, MICROBIT and RepRap. Every year there are more than 50 Maker Faires and Mini Maker Faires: Maker Faire Rome – which is the largest one – has exceeded 100 thousand participants during its third edition in 2015. Across Europe, the business world is investing in makers, craftsmen are renewing thanks to digital fabrication and schools are opening their own makerspace.
Why a  European Maker Week?

We believe that makers will be able to make a positive contribution  to our Society and to the European Economy, especially within the educational environment and by creating innovative Startup based on hardware products. We want to enhance this world of people who work locally but in a global network. We would like to  combine our forces in order to organize a week of public events across Europe: a huge umbrella event under which local initiatives will flourish as part of a European network. We want to encourage the encounter and the dialogue between makers and the society, citizens, investors and Institutions, by spreading the awareness of how the construction of a different future will be happening thanks to this new ecosystem.

Of particular importance is to use the EMW – European Maker Week as a platform to build bridges between local makers ecosystems and local authorities and media.